Like all other plants, aquarium plants need different nutrients to grow healthily. Symptoms of nutrient deficiency in aquarium plants and the increased occurrence of algae are signs of nutrient imbalance in the aquarium. Regular water changes and a fertilization adapted to the needs of the plants can help with such problems.
For a healthy growth, plants need 16 different nutrients that must be in a certain ratio to each other. If a nutrient is present in too small amount, it limits the growth of the plant and thus the absorption of the other nutrients. Phosphate is for example a nutrient, in which there is only a relatively small need. While the plants take up 1 mg of phosphate, they also need 5 - 10 mg of nitrate and 10 mg of potassium. If one of these nutrients is missing, the plants grow poorly and less phosphate is absorbed. The consequences are an increasing phosphate content in the aquarium water and the appearance of brush algae. Fertilizing with the missing nutrients allows the plants to grow and consume the phosphate. In this way, long-term brush algae can be "combated" by fertilizing with nitrate or potassium. On the other hand, phosphate deficiency can lead to an increasing nitrate value, which in turn causes green algae. Fertilizing with phosphate can help here.
Uptake of nutrients is influenced by environmental factors (temperature, pH) and by competition with other nutrients. For example, over-fertilization with iron can lead to manganese deficiency. For the construction of cellulose, starch, proteins, fats and dyes in the plants, enzymes are necessary, which are composed of different nutrient elements. If the formation of these enzymes is disturbed by a lack of micronutrients or lack of energy, it may lead to the expression of deficiency symptoms for a nutrient that is actually present in the water sufficiently (induced deficiency). Nutrient deficiencies are therefore only to be defeated, if the diagnosis includes the entire plant, also the accompaniments such as algae growth or biogenic descaling and the water values. 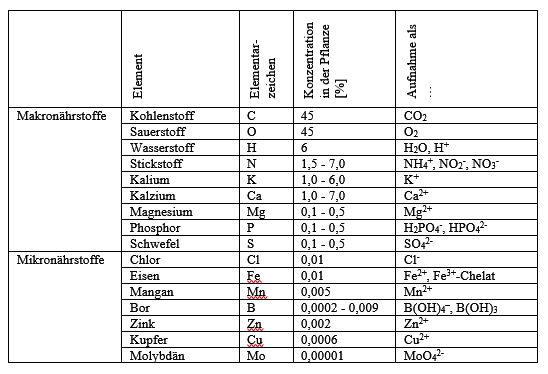 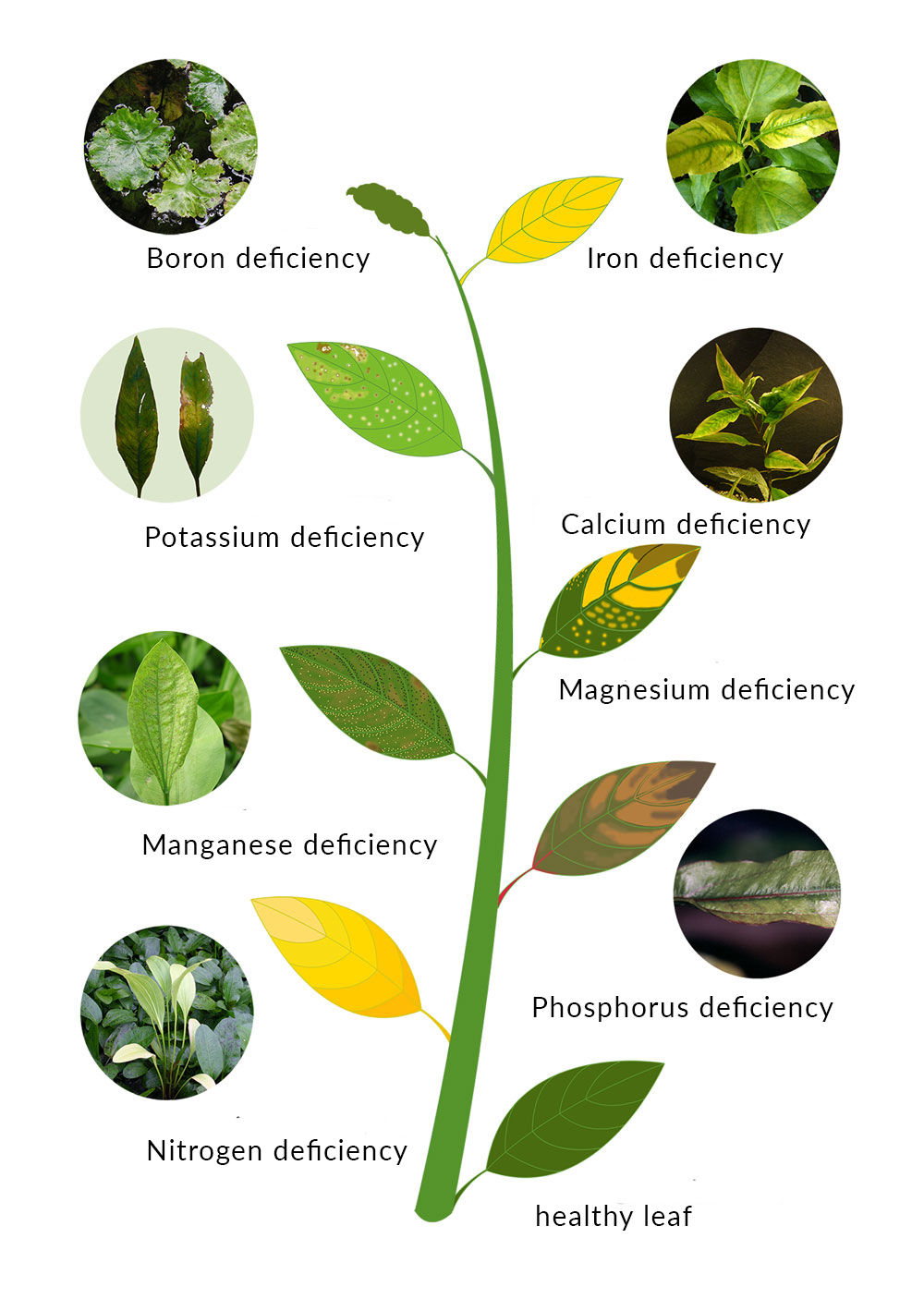 A flyer (in German) with this overview is available from the NRW Regional Group and may also be here to be downloaded.
Artwork by Maike Wilstermann-Hildebrand

All plant nutrients have a function in the metabolism of the plant in which they can not be replaced by other elements. So all elements are equally important and all indispensable.
Carbon (C), oxygen (O) and hydrogen (H) are the main constituents of cellulose, hemicellulose and pectin that form the cell walls. These three elements are also contained together in proteins, enzymes, DNA and chlorophyll, as well as in all other molecules of the plant.
Nitrogen (N) is part of the DNA. It is found in enzymes, in chlorophyll, in various plant hormones and in many other compounds.
Phosphorus (P) is the most important energy source in the plant metabolism. It is indispensable for the function of membranes and also part of DNA.
Potassium (K) is important for water balance and internal cell pressure. It activates various enzymatic reactions.
Calcium (Ca) stabilizes cell walls and membranes and serves as a messenger in cell sap.
Magnesium (Mg) is irreplaceable as the central atom of chlorophyll for photosynthesis and it is also indispensable for the formation of proteins.
Sulfur (S) is a component of proteins and DNA. It is also necessary for the plant to take up nitrogen. Depending on the plant species, sulfur deficiency can cause symptoms of nitrogen deficiency or nitrogen over-fertilization.
Iron (Fe) is part of chlorophyll precursors. It is also important for nitrogen metabolism.
Boron (B) affects many metabolic processes. It is particularly important in cell division at the shoot and root tips.
Manganese is important for photosynthesis, protects cells from free radicals, and contributes to the formation of phytochemicals.
Copper, zinc and molybdenum are involved in various metabolic processes as cofactors.
Chlorine serves to maintain osmotic pressure and electrical balance in the cell. It is also necessary for oxygen-reducing reactions in photosynthesis.

Due to the different function of different nutrients in the plant, deficiencies cause the typical symptoms on different parts of the plant.

Symptoms visible on all parts of the plant:

Symptoms start to show on the older leaves:

Lightening of all leaves starting at the oldest ones; Small plants, few branches: Nitrogen deficiency, root damage or decay in the soil

Take care of young plants and cuttings; on older plants reddish colorations first on the veins of the older leaves and the stems, later on the whole plant dirty dark green to blue-green leaves; Plants stiff; possible death of the leaves beginning at the leave tip; reduced growth: Phosphorus deficiency

Chloroses in the intercostal fields give the leaf a marbled appearance; Leaf veins and leaf margins initially remain green; necroses can develop from chloroses: Magnesium deficiency
Leaf margins become chlorotic between the veins and form a light border around the leaf; if there is persistent deficiency, all leaves are affected: Calcium deficiency

Symptoms start to show on the younger leaves:

Chlorosis in the intercostal fields of younger leaves: Zinc deficiency

Because nutrient deficiencies are not just due to the lack of nutrients (acute deficiency), but may also be caused by a uptake disability or limited metabolism (induced deficiency), It is indispensable to do a water analysis at the first occurrence of a new deficiency. It is possible that problems can be solved by changing the water or adjusting the pH. Perhaps the water from the tap does not provide enough of a nutrient (eg potassium, calcium, magnesium) or too much of it (eg calcium, phosphate). A change in the rhythm of change or the addition of rainwater / osmosis water may then possibly already remedy.
If the problem is the lack of nutrients, a fertilizer containing this nutrient must be chosen. There are very good fertilizers where the packaging indicates what nutrients they contain. These fertilizers are all good but not suitable for every aquarium. Because each aquarium is different, you do not necessarily have the full success with the fertilizer that anyone recommends in a online-forum. If you are unsuccessful with a fertilizer or even boost an algae bloom, then the fertilizer is not bad, but you have chosen the wrong fertilizer. For example, there are fertilizers with phosphate, potassium and micronutrients for aquariums with high nitrate content. For high phosphate aquariums, there are fertilizers with nitrogen, potassium and micronutrients. Fertilization with an iron fertilizer is only successful if the cause of the deficiency is actually a shortage of iron and not precipitation with phosphate and unfavorable pH.
So when choosing your fertilizer, make sure it contains the nutrients your aquarium really needs.